“They shall speak of the glory of Your kingdom, and tell of Your power, to make known to all people Your mighty deeds, and the glorious splendor of Your kingdom.” Psalm 145:11-12

I vividly remember the many years of basketball I played growing up, from playing in my driveway, to peewee basketball, to junior high, and finally high school (yes, sadly, my b-ball career ended there). It may [not] surprise most of you that know me, but I was never one of the “bigger” kids on the court. This meant that I spent a good deal of time riding what we used to call the “pine pony” (aka, the bench). I remember watching many a game, analyzing every move of my teammates, all the while thinking, “I could do that better” or, “Why in the world did he take that shot?”

At some point in my illustrious basketball career I started growing and finally got some playing time. Needless to say, playing in a basketball game is much different than watching one. The pace of the game seems so much faster when you’re on the court. The lights seem brighter, the crowd screams louder. They’re fickle, too: they’ll love you if you make the winning shot, but blame you for missing that free throw that cost the team a win. You feel so much pressure stepping out on the court, especially when the game is on the line.

In a lot of ways, the Christian faith experience relates to my days as a basketball player. We often find ourselves sitting on the sidelines, critically analyzing the moves of others. It’s usually pretty easy, and it’s always safe. Who’s going to think any differently of the guy just sitting on the sidelines? What risk is there for that guy?

The risk happens when we enter the game.

One of my favorite songs right now is by the band Switchfoot. I’ve always been a fan of theirs because they seem to say things other bands are afraid to say. One of their recent songs, called “The World You Want,” says this:

Is this the world you want?

You change the world

Switchfoot is telling us to enter the game. If we want to advance the Kingdom of God, if we want to change the world, we’ve got to step out and do something. Sadly, many of us (me included) spend more time complaining about the world we live in rather than trying to make it something better.

We are all given a mandate from Christ to be a key player in the coming of His Kingdom. It is not enough to hope someone else is going to do this job: the responsibility is on all of God’s people.

My prayer on this thirteenth day of Lent is that I would be willing to do my part in advancing the Kingdom.

Put me in, Coach. 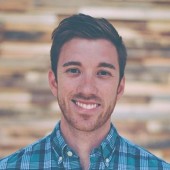